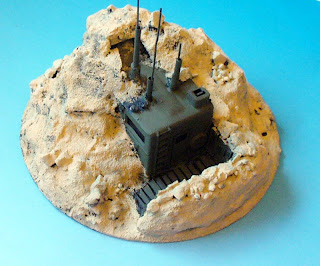 Just a quick update on the DFS project and the radio station, the top picture shows the radio station with the first base colour on the ground work and the radio shack in Russian ww2 green base coat. I paint all the ground work on my terrain projects with the same three match pots working from a biscuit brow through to a magnolia white in the top layers.
The picture of the DFS model shows it having its left wing glued on with PVA and some blue tack to keep the wing in place while the glue sets. The picture also shows the flap on the wing has been cut and scored so it can be positioned in the down position.
Posted by airhead at 21:26 No comments: 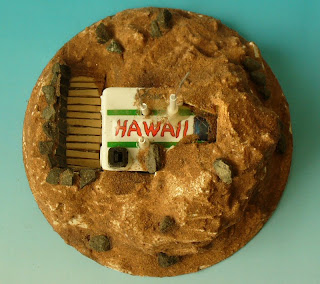 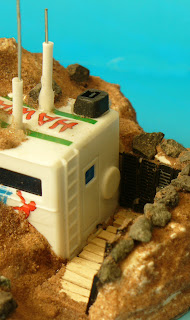 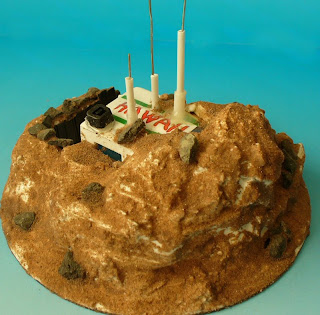 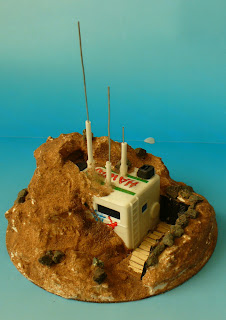 My last few posts have been focused on the aviation side of my current projects, so this time back to a more terrain based projects. This communications bunker/hut/shed thing? not sure what it should be called really, is built around a camper van which come in a set of three vehicles bought (£1.69p) because it included a OH-6 Loch Helicopter which I can use for my 15mm Vietnam project. See my post from November 26th LINK for a picture of the camper van in all its glory and original packaging. As I said in that post, the van did go in the bin, only for me to fish it out, after having second thoughts.
The ground work was built up with scrap foam board, which was then covered with polyfilla, pva glue, sand and small rocks. The entrance to the bunker has coffee stick duck boards and the supports for the trench walls are made from cut down cable ties, which have some nice detail on, which should dry brush up well. Cut of the top of one of the cable ties and stuck it on the top of the van, to add a bit of detail. The aerials are from paper clip wire in cotton bud tubes.
I'll also build a free standing satellite dish, so it can be used in a WW2 or more modern setting.
Posted by airhead at 21:13 1 comment: 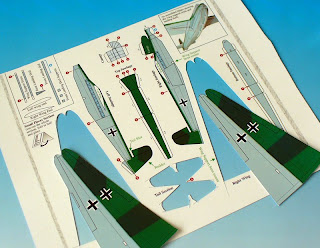 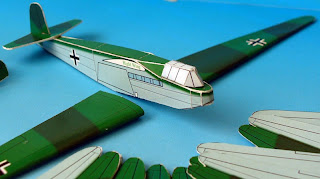 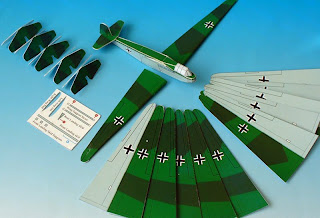 My regular reader will know I'm a big fan of free stuff, I down loaded a 15mm scale card model of the German DFS - 230 glider from the Flames of war web site quite some time ago, in fact so long ago that you didn't have to register at the time. If I remember correctly the was also an article about making one from solid balsa wood also on the site.
My WW2 15mm forces will include a German Parachute Sturmregiment, to be bought from Mr Pig at this years Alumwell WMMS show on 13th March, to help support the Italian in their ambitions in East Africa. I've based their organisation on the excellent Rapid Fire rules Maleme airfield pdf info sheet link.
I aim to do quite a bit of additional painting to the models once built, firstly to cover up the white lines on the model where you have to score the card to fold it, I also intent to make some of the six in varies states of crash landing and shot down.
Posted by airhead at 21:42 3 comments: