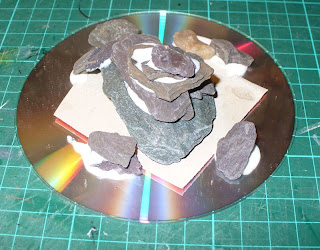 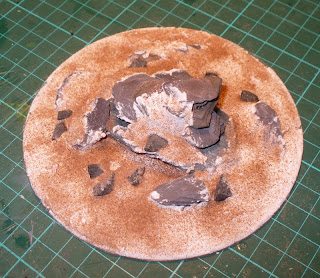 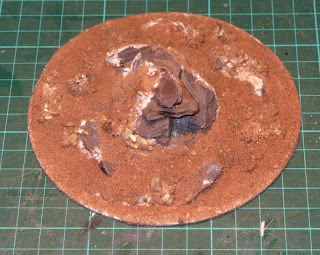 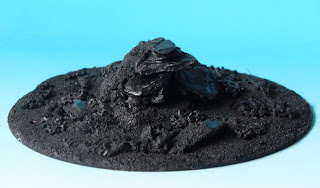 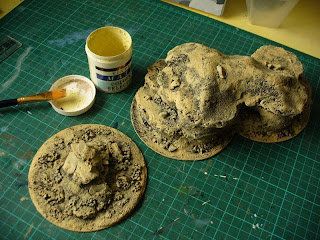 A selection of pictures showing the construction of a small rock outcrop based on an old CD. The top picture shows the small bit of cardboard used to cover the hole in the middle of the CD, and the small bits of slate picked up from the garden glued into position. The next couple of pictures show the base being built up with poundland filler and PVA glue and sand. Next up the base is undercoated with black matt spray paint, then the final picture shows the small rock outcrop next to one of my bigger hills with its fist coat of paint from one of my trusty match pots. The next stages will be to add some small trees and shrubs and dry grass to the base.
Posted by airhead at 20:56 2 comments: 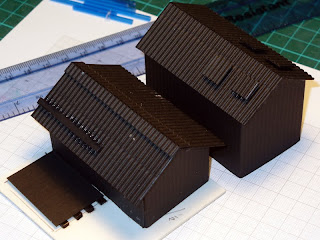 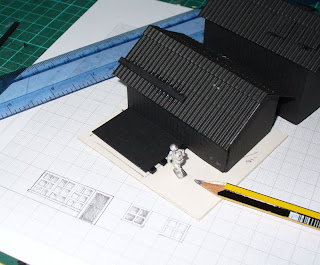 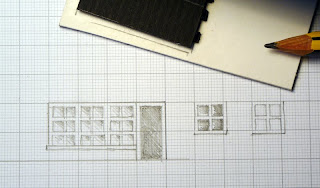 Some WIP pictures of the ALR (Asmara Light Railway) station and engine shed. The bottom two pictures also show an idea I had about making windows, and how to make the process less painful and more symmetrical. I down loaded a free pdf of some graph paper of the Internet and printed it out onto some light card, 160 gsm weight. Then measuring the space on the building where the door and window is to fit, its straight forward to draw them up. I then glue the graph paper onto another sheet of 160 gsm card let it dry then trim out using a new scalpel blade, then glue onto another sheet of card to give the depth to the door and window frames. Not sure if this method has been posted on the web before, I'm sure it must have been somewhere. More pictures to follow as the station and shed are painted. Trusty peter pig 8th army chap in 15mm scale to give some idea of the size of the buildings.
Posted by airhead at 13:37 2 comments:

The Tao of my terrain

No picture in this post! Just some general ramblings about my terrain projects and the thought behind them and some of the guiding principles that direct what I make and how I make it.
I thought it might be an idea to outline the guiding philosophy I use to organise and plan my terrain, I have started with the main constrain of space, I only have an area of 5x4 feet maximum for my terrain to be laid out on, I have a wide range of Historic interests and areas where I intend to build up forces. So the terrain has to be generic enough to be usable in as wide a range of historic and geographic locations as possible.

My first key decision was that the base terrain boards would be flat with no terrain sculpted into or onto them. All the features would have to be free standing and based as individual items. My main reason for this decision was that I could now use both sides of the main 2x2 foot boards, with one side being North European type ground (green) and the other side being Mediterranean/North African (sand) type colouring. so four boards rather than eight.
Along with the main 2x2 foot boards I will also have some 1x2 board which will be used to construct things like Rivers and Coast Lines. When an element of sculpting into the boards is essential.
Taking the basic 2x2 foot board as a starting point I divided the boards into a grid of 3x3 inch squares. So my smallest buildings are on 3x3 inches square base boards, mid size building on 6x6 inch squares and combinations of multiples of 3 inches. The buildings on the 3x3 inch squares are ones which are used in close proximity to other buildings, requiring a close fit. All other buildings or terrain features are based on old CD's, or multiples of.
The next point for me to decide on after the size of the main boards, was the colour of the base boards, both the European and Middle east board use the same basic set of colours. Lime stone with a hint of Cotswold stone. Now I know that the soil in most of south Vietnam is reddish in appearance, but I'm quite happy to go with the soft sand beige colour for my particular part of south Vietnam. This also makes things easier when basing my figures, having just the one basic colour pallet to work with.
I am aiming to produce terrain which is gaming friendly, robust and easily stored, but also attractive to look at, and as accurate as I can make it, within my own requirements. A good example of this is the different elements which are going into my WW2 Italian/British East African provincial capital in 15mm scale. Some but not all of the buildings will also be used in my British Malayan WW2 set up and also in South Vietnamese, and could be used in my colonial ventures as well.
The are some areas where I will produce be-spoke terrain, such as my Blitz Freeze project for E-front winter terrain in 10mm. I also have plans for my WW2 and Ancient naval forces to have specific shore line terrine features created to go with the dark blue clothe that I use for the sea. I have also got a rough outline of some a terrain board to use with a WW2 E-front Kursk type set up in 2mm scale.
Hope you find the above of some interest, back to normal service with some new pictures next time.
Tao
Posted by airhead at 11:04 No comments: