Some of my Essex 15mm scale miniatures ancient forces, who have been with me for a very long time and finally have some paint on them. There Greek foes are still on the paint desk waiting for some shield transfers to be ordered for them.

The aim is to have matching double size forces for BBDBA (Big Battle DBA) so 24 elements per army, for the Greek v Persian wars Of the late 6th century BC. 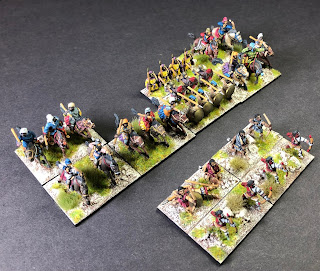 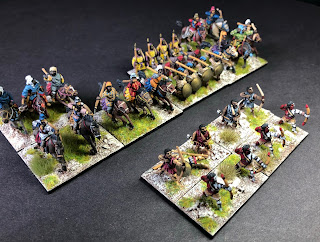 Still have some details to add, but very Happy with how they have come out looking, considering the age of these Essex figures. Quite a few Persians still to do and also the camps for the two sides as well.
Rich from TFL has recently been making a city wall section with some internal buildings in 28mm scale for his Italian Renaissance Forces’s. Which has got me thinking about what I could produce similar in 15mm for these army’s? I’ll keep you posted on developments.
That’s all for the moment, stay safe folks, all the best
Airhead
Posted by airhead at 17:19 No comments: