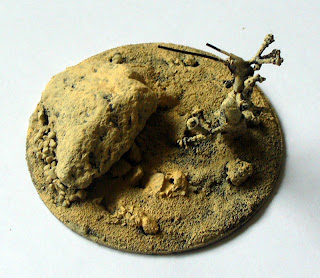 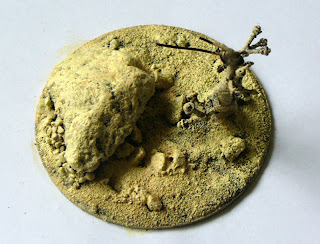 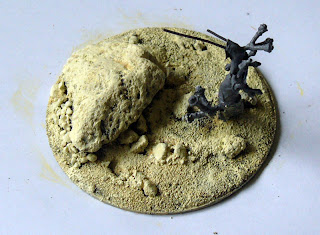 More work on the base for the flying DFS glider, following on from the picture at the bottom of the last post. Built up the ground with poundland filler and then PVA glue and sand with some strategically positioned granite chipping's as rocks. Then match pot paints in the usual three shades. Progress is being made on the other 5 gliders, but no pictures at the moment.
Posted by airhead at 22:19 1 comment: 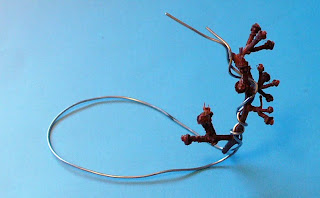 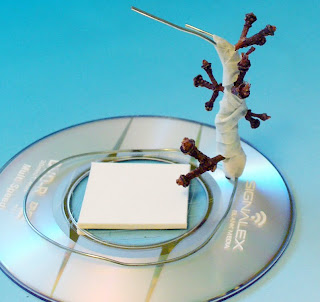 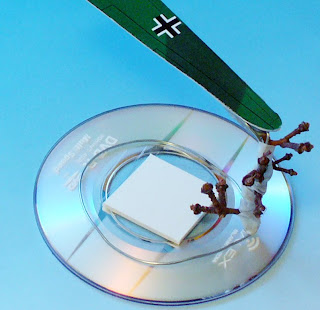 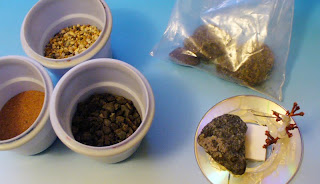 I have moved onto the next DFS 230 this one is going to be in its final approach to landing, swooping in over the sun bleach terrain of Crete/East/North - Africa. The basic idea came to me after making up the first of my 6 DFS's. The model being made from card is very light. So the idea of showing a glider coming in to land popped into my head. The wing tip of the glider would be show just clipping an olive tree, this is the point where the glider is secured to the base, made from a mini CD.
The first picture shows the tree/grape stem with wire wound around the trunk of the tree and shaped into a loop to be glued to the base.
The second picture shows the tree and wire on the CD base and the small square of card glued into place to cover the hole in the middle of the CD. This picture also shows the wire and grape stem covered in masking tape to create the tree trunk. I cut the masking tape into thin strips, to make it easier to wind them around the trunk.
The next picture shows the wire hot glued onto the CD base.
The 4th picture shows a DFS wing blue-tack into position to give an idea of how the model will be fixed to the base. The two strands of wire sticking out of the top of the olive tree will be inserted into the wing. The last picture shows the base with a selection of sand grit and stones ready to be glued into position.
Posted by airhead at 20:28 No comments: 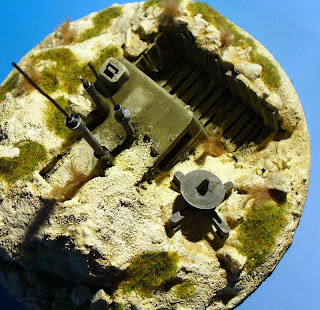 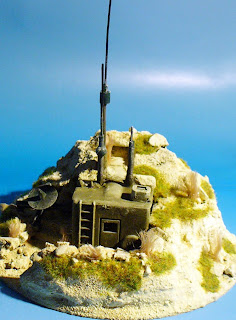 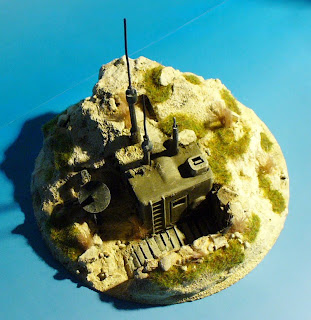 The Hawaiian camper van is transformed into a WW2 radio station. Radio Il Duce East Africa, or alternatively BBC radio Asmara. The satelight dish is free standing and can be added in to move the bunker a current location in the middle east. The antenna are made from paper clip wire, glued into cotton bud plastic tubes, with a selection of beads to add detail. The satelight dish stands on a based made from a DIY tile spacer.
Posted by airhead at 21:25 4 comments: 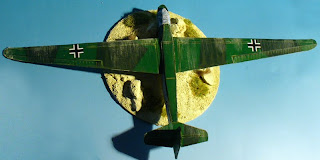 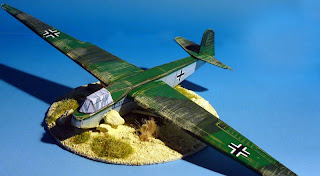 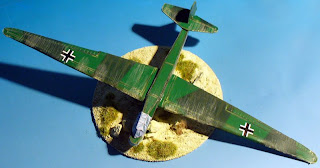 The first of my DFS 230's is finished, only five more to go. I've done this one as a strait in landed type with no real customising other than one of the wing earilons in the down position, and also one of the tail flaps down, quite a bit of additional painting onto the base model. Trying to give it the look of a glider that had taken off in a dust storm and just landed in a great cloud of dust and sand. The base is from a mini CD, 80mm in diameter, 4 for a £1 in, yes you guest it, poundland.
Posted by airhead at 17:19 No comments: