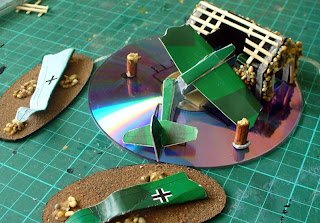 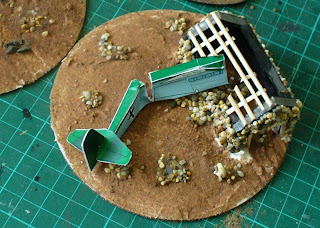 Some progress pictures of the DFS 230 and stone barn combination. the first picture shows the main base along with the two bases for the severed wing sections which have been covered with PVA glue and sand, along with some small areas of stones. This picture also shows the frame work of the roof of the barn made from cocktail sticks cut down and shaped with a craft knife, to give them a rustic look.
Posted by airhead at 21:13 No comments: 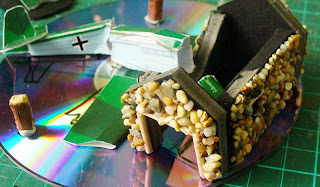 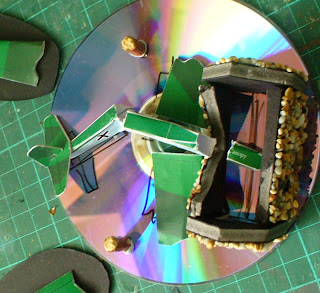 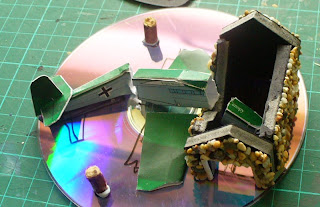 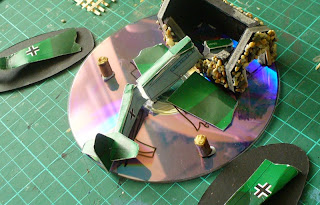 Some quick progress shots of the DFS and stone barn combination, testing out the position of all the elements going onto the base and making sure they all fit on. The idea is that the DFS nose has directly hit the window in the side of the bard and as the building is old the impact has brought down the hole side of the building and half of the roof.
The aim is to get the bulk of the DFS's finished this next week, so fingers crossed. Have a good Easter and lets hope the sun keeps shining.
Posted by airhead at 07:34 No comments: 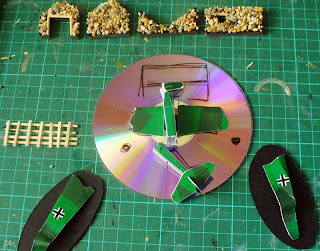 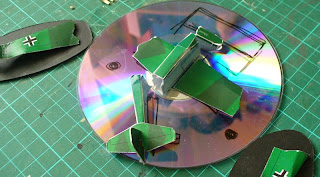 Moving along with the DFS production line this time, this is the most involved and complicated of all the glider bases. The idea behind this base is to represent what has happened to one of the attacking German gliders when a 6 is throw for its landing.
Don't ask me why but I just got the idea in my head of Private Godfrey of the Somali land home guard, tripping over while carrying the sections lewis gun to it firing position, letting of a few random rounds, and by shear luck severing the control cables of the doomed DFS 230 swooping over head. It pitches right into a rustic stone building/barn with the nose going through the side window, after having both wings severed by some conveniently positioned olive trees, and as the roof collapses in on to the glider, the doors of the building blow out.
The top picture shows the various elements laid out, the 2 black dots on the CD show the position of the two olive trees. The stone building is built from foam core covered with fine stones from a fish tank, small size and nicely rounded. The roof beams were made from cut down cocktail sticks. as was the door frame and the window lintel. The middle shows the building in more detail.
*Just to say my Private Godfrey is part of my revised version of the renowned fighting unit that was Warmington on Sea home Guard. My version is made up of UK expats who are based in British Somali land but still determined to do their bit for the Empire.
Posted by airhead at 20:15 No comments:

DFS, we have lift of 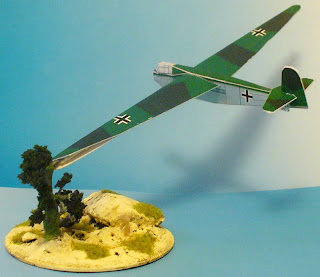 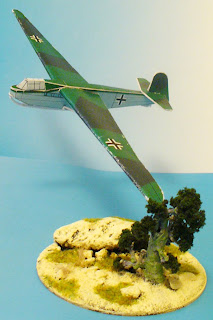 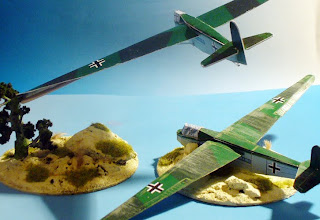 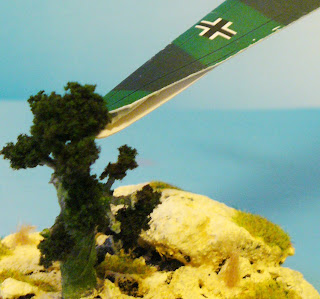 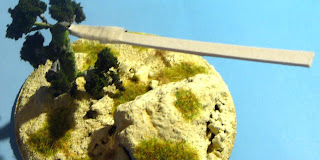 Slow but steady progress on the DFS fleet, hindered by work being mad at the moment and a big DIY project on going at home. The pictures above show the flying DFS in position on its base. swooping in over the heads of the startled enemy. Still needs to be painted to cover up the white lines where the card is cut during construction, and to be dust and dirtied it up a bit.
The second from bottom picture shows the end of the wing on the tree top, still open and yet to be glued shut. The bottom picture shows the splint of art board bound to the two wires sticking out of the top of the olive tree and bound into position with masking tape, then covered in PVA glue to hold it firm. The art board splint goes three quarters of the way up the inside of the wing, to prevent the wing sagging over time and make it more resistant to damage.
I had my annual day out at the WMMShow in Wolverhampton in early March and purchase the bulk of my German paratroops from Mr Pig, also got some more Japanese and made a start on my Vietnam forces. Also a box of Valiant late war Germans. So a good start to the year on the Wargaming front. Even if my post count is a bit rubbish so far this year. One the Bathroom is sorted out hopefully thing will pick up latter in the year.
To finish of with a tip for those of you looking for expanded polystyrene to use in your terrain project, my local Home base DIY store is giving away polystyrene for free as you leave the store to use in plant pots. till next time.
Posted by airhead at 21:29 3 comments: