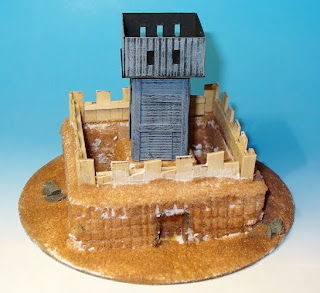 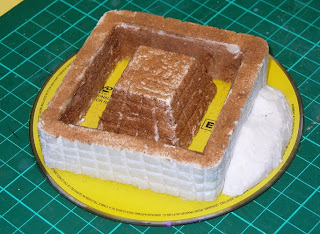 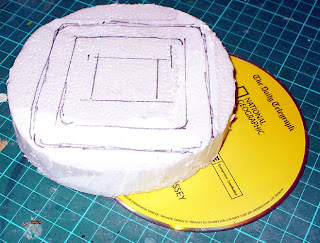 A Roman watch tower is next on my list of terrain for my Early Imperial Roman forces. Again no overly deep research on my part, other than pictures from the book A Gathering of Eagles, about Romes attempts at conquering Scotland, and a quick look on google pictures.
Top picture shows the watch tower in its current state, still needs the roof to the watch cabin, more ground work, the tower and cabin are made from ribbed black card which makes painting that much easier, and helps to create the wood planking effect. The walls are built from coffee stirring sticks and match sticks.
The middle picture shows the soil walls and the base of the watch tower, after being cut from a large block of polystyrene with a craft knife blade. Sand and PVA glue have been put on the tower base and the inside of the walls. You can see on the outside of the walls the soil block effect cut into the walls with the craft knife.
The bottom picture shows the solid block of polystyrene with the wall and tower base marked on with black pen. It also shows the CD it was based on.
Posted by airhead at 22:00 No comments: 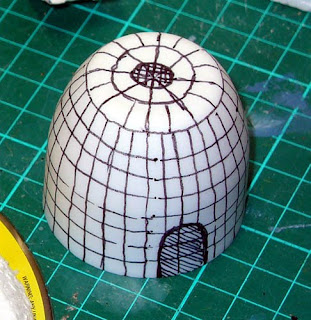 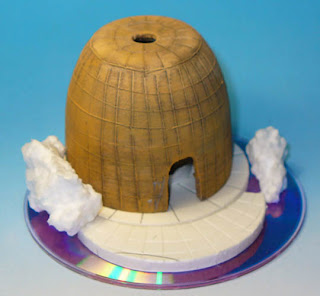 Arthur's oven was a Roman temple which stood in Scotland until 1743, when it was destroyed to make a dam for a local iron works. Have a look here for further information LINK it was also featured in the book A Gathering of Eagles. The main part of the building is the lid from a roll on deodorant, with the sky light and door cut out with a sharp scalpel blade. The Stone work was cut into the plastic cap again with the sharp scalpel blade. the top photo shows the cap with the stone work marked on with an indelible pen. The bottom picture shows the temple in position on its base cut from poly board, with the stone flag stones cut into the card, its based on a mini CD 80mm across. The small pieces of polystyrene will be painted to represent natural rock outcrops. The painting of the temple is not finished, its much to orange in colour at the moment.
Posted by airhead at 21:33 No comments: 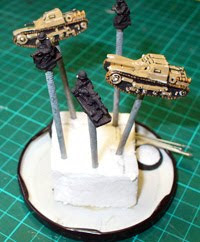 A simple stand to keep models free standing when drying during painted. A small block of polystyrene stuck to the underside of a jar lid. I usually super glue my 10/15mm models to galvanised nails to paint them.
Posted by airhead at 21:25 No comments: 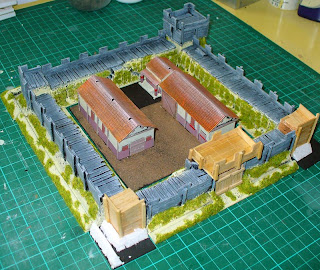 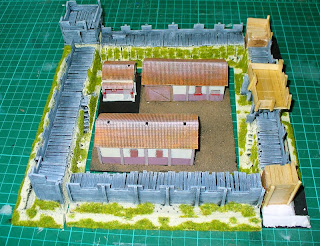 Two photos showing the Roman fort laid out with all elements in place, two of the three smaller corner towers are still to be finished, and the gats house turret needs undercoating (Humbrol Mat black) and painting. The fort buildings have been stuck onto their base and sand has been PVA'd onto it. No stakes in the defensive ditch yet, I decided it would be simpler to paint the ground work first then insert the stakes (cocktail sticks) and PVA them into the ditch banking.
Posted by airhead at 21:32 4 comments: 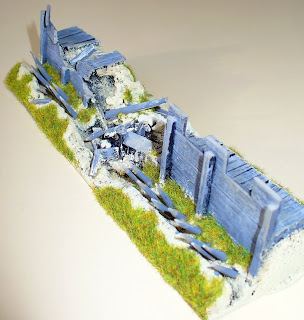 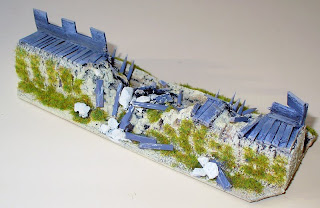 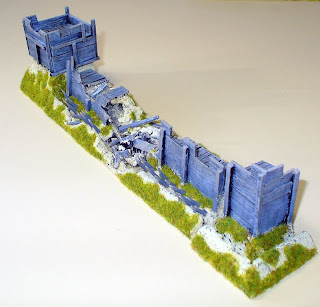 Three photos of the Roman 10mm scale breached wall section, the bottom picture showing the wall with towers on each end, the larger one for artillery. The top photo shows the use of cocktail sticks for the defencive stakes, only 36p from Morrisons supermarket, and you get a very useful hexagonal plastic container, which is ideal for making pillboxes from. The photos have come out with the wooden walls looking very blue! they are actually grey. The middle photo shows the back of the wall, with the flock glued on in clumps to help with creating the impression that the wall is made from cut sods of soil.