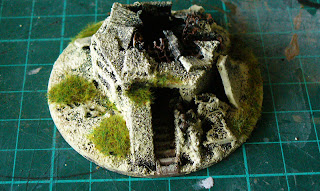 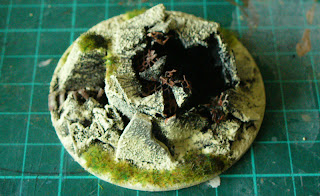 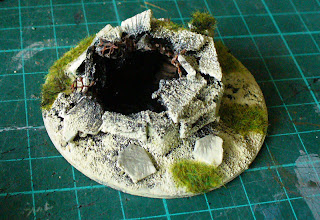 Finished the 4 Pill Boxes, with some green flock and dry brushing, the bottom three pictures show the destroyed Pill Box with the wire mesh picked out in rust colour. Over all very please with how these have turned out, they will bring the coastal defences up to strength in combination with the heavy coastal battery already produced.

Next up I will be having a go at producing some explosion markers, both on the ground and also air burst explosions. I have also been looking at producing 10mm scale buildings for my Early WW1 set up. I have briefly blogged about this before. The GHQ micro collection has been expanded over the last two years, so time to explore the possibilities. 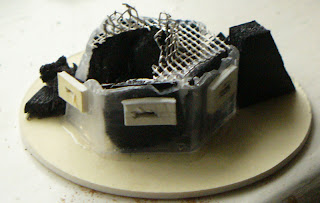 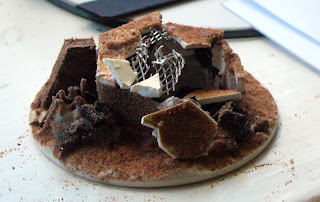 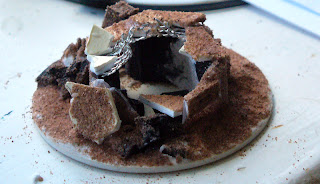 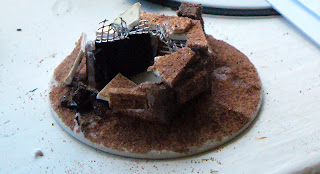 OK so it should be "Pill Box busting" to go with the other titles in this project, but Bunker busting sounds much better in my opinion. the first picture shows the pill box before the application of PVA and sand to texture it. The construction was identical to the other three pill box's up to the point at which I started to destroy it!

The wire mesh was quite soft and easy to cut with a craft knife. I was going for the idea that the pill box had been destroyed by a direct hit on the roof by a heavy artillery shell or large bomb. I wanted the pill box to still be recognisable as a pill box, so not reduced to a pile of rubble. So 2 out of the 6 sides have been destroyed and the roof slab of concrete shattered and pushed off to the front and sides. Please with how its worked so fare and I must find more projects to use the mesh in.

More pictures of this one and the three others finished to follow shortly.