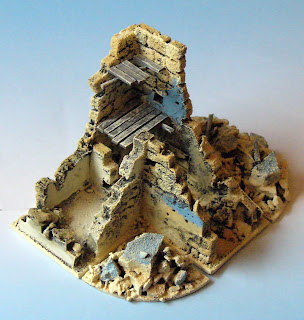 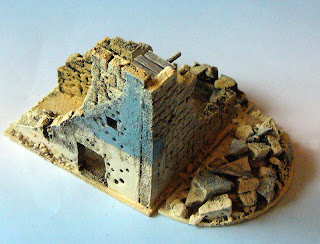 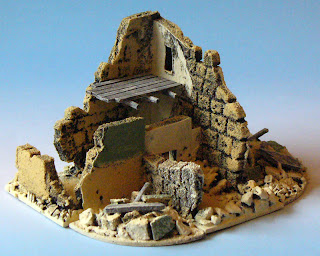 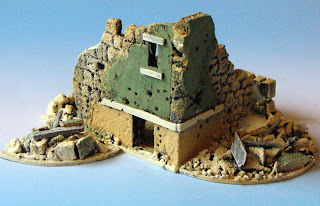 Good progress being made at the moment on a number of projects, it's amazing what you can do in 20 snatched minutes each morning, before leaving for work. The 4 pictures above show the 2 battle damaged houses as they currently stand, I need to add some dark grey/black smoke damage and more bullet strikes to the brick work, especially around the doors and windows. I'm also looking into adding some graphics, posters, street names and general street stuff.

The insides of the houses have to be a compromise between being able to position troops within the building and adding to the inside as much rubble and timbers as possible. I'm pleased with how the green/blue paint has worked on the outsides of the buildings, I have used these colours in picking out some of the rubble on the rubble bases which correspond the the two houses.
Posted by airhead at 21:33 4 comments: 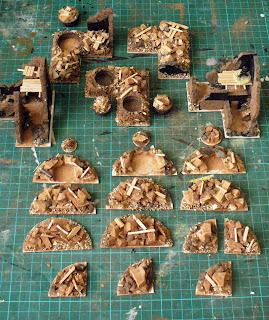 Progress on the destroyed houses which are in the centre at the top of the photograph and also the two battle damaged town houses on the top left and top right. All of the rubble bases now have scrap bits of wood glued into position and have had a scattering of sand applied with PVA glue. So everything is ready for its black under coat. click on the picture for a bigger version. The top row of half circle rubble bases can be seen with their round mini rubble bases removed to show the defencive positions ready to take troop bases.
Posted by airhead at 23:14 1 comment: 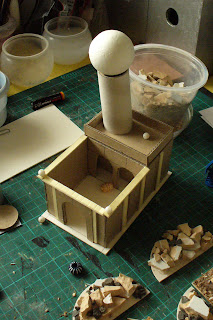 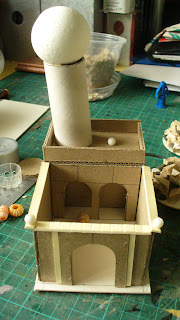 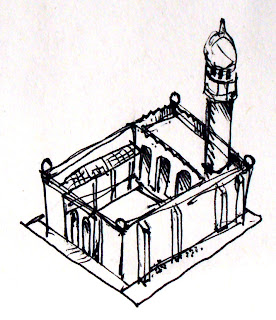 Anew building to add to the town, a small Mosque. The top two pictures show the building as it stands at the moment. Bottom picture is my original sketch of the building. Thinking about this building after getting it to this stage of construction it occurred to me that I had done no research on Mosques at all, not even a simple search on Google images. You can also see how the model differs from the sketch, with the number of arches in the inner building and the main door have been changed. The small ball on the top of the tower is a polystyrene one you can purchase these from craft shops. To make up for my lack of research,  I'm going to look into using some elaborate ceramic tile patterns on the inside of the building and main walls, and perhaps a small dome on the roof to go along side the minaret. 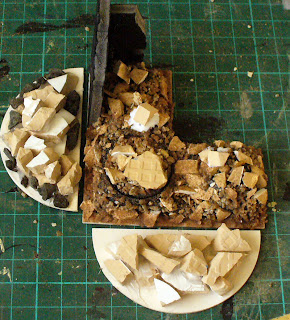 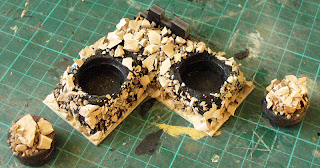 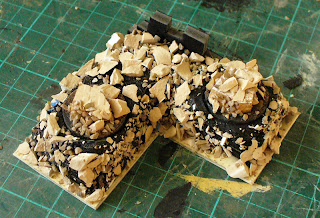 More progress on the destroyed town houses, the top picture shows one of the houses on its "L" shaped base with its add on bases of rubble around it. You can make out in the right angle of the "L" a cutout dugout with the plug in place. The bottom two pictures show one of the other bases with the two dugouts filled and removed.

On another topic, I came across a great post on the SD painting forum, linking to a blog, showing how to make a gaming matt. Not something that I had ever really considered before reading this post has got me interested in the possibilities. So something to look into in the future. 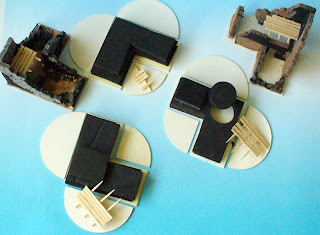 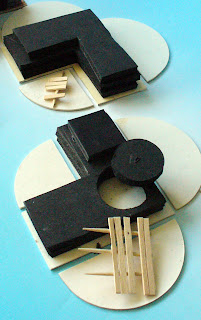 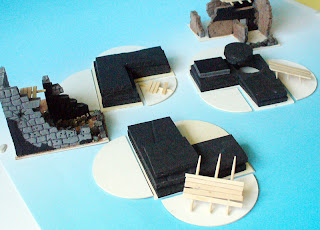 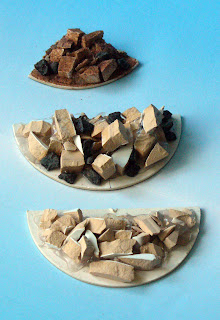 Work in progress on the destroyed houses, the top three pictures show the "L" shaped bases with the foam board sections cut out and in position, ready to be cut to shape. Creating smooth rounded shapes which can then have rubble built up on them. Along side the "L" shaped main sections are the rubble section bases. One of the houses has a 2p size section cut out which will be used as a dug out. The other two will also have dug outs cut into them. Which when not in use can have the plugs replaced, covering up the dug out holes.

The bottom picture shows the first three stages of constructing the rubble bases, the top one still needs the small grit adding. 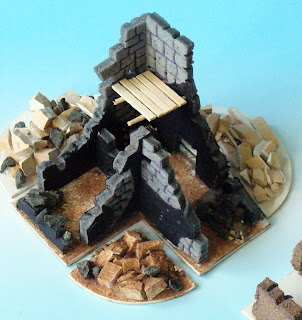 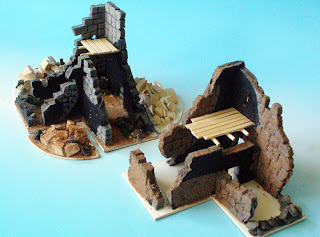 Progress on the battle damaged versions of the Asmara town house, the top picture shows the 3 areas of rubble which can be added to the L shaped base of the house. Two semi circles and one quarter circle of art board are used to base the rubble on. Health and safety warning!!! the larger bits of rubble are made from smashed up ceramic tiles, this process involves a concrete garage floor, an old bit of carpet (over the tiles) and a hammer. The ceramic tiles can be very sharp when smashed up, I drew blood on more than one occasion. So, best to wear gloves and eye protection when getting medieval on your tiles.

The idea of using the broken up tiles came to me when re-tiling one of the bathrooms at Airhead towers. Funny how the mind wonders when doing DIY. To create the look I wanted for the rubble I combined the broken ceramic tiles with Granite chippings from the local footpath, grit for use with cactus plants and sand. The combination of these different types of material worked well.