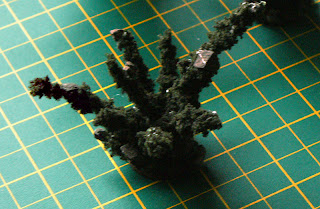 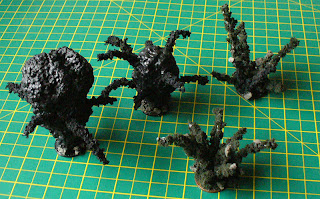 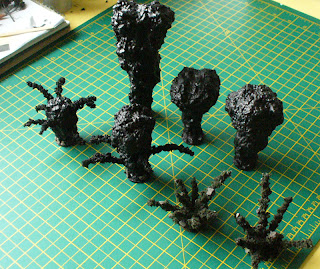 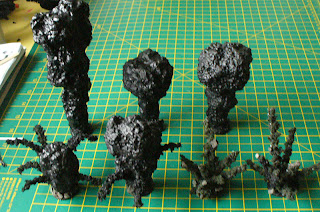 Progress pictures of the barrage/explosion markers. Before putting the base coat of cheep black acrylic paint onto the polystyrene markers I undercoated them twice with neat PVA glue to give them some strength. I retrospect I could have inserted a  wire support. The two dynamic explosion markers have had some small granite boulder stuck to the arms of the explosions with UHU glue. The other markers also had them glued around their bases. It was quite interesting how the textures of the different bits of polystyrene lent them self's to different types of explosions, one will represent a direct hit on a target, so lots of flames, yellows, reds and whites. The others more like dust clouds with elements of black/grey mixed in.

Also this is the first outing of my spanking new cutting mat, thanks to Mrs Airhead for the Christmas present. She couldn't stand the thought of people looking at pictures of the old one. 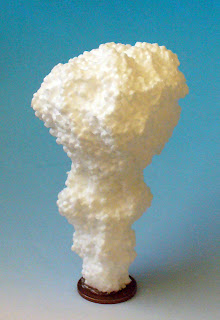 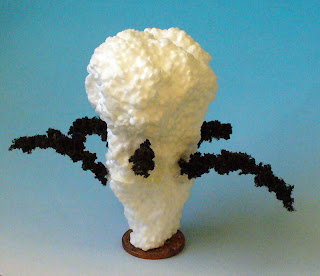 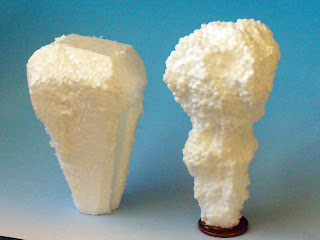 The next phase of my explosion markers project is shown above, in some work in progress pictures. I have seen some great explosion markers being produced and shown in photographs  from various wargaming shows. The one thing that for me does not ring quite true, is that in most of the pictures I have seen is that most if not all the explosions have taken place in the same instant. As though a battery of 10+ guns had all fired in the same instant.

What I'm trying to achieve is the look of a barrage being laid down over a period of time, the top picture gives the best representation of what I'm trying to achieve. The bottom picture shows how I trimmed down blocks of polystyrene into the rough shapes I was aiming for. And then using thumb and forefinger I nibbled away at the polystyrene until just the shape of the explosion was left. This was then hot glued to a 2p coin as a base, giving the very light polystyrene a firm base. Some of the explosions then had paper clip wire inserted into the body of the explosions and then had foliage clumps stuck to the wire with uhu glue.

The next stage will be to glue sand and rocks around the base areas of the explosions, and to start to think about how I'm going to paint them. 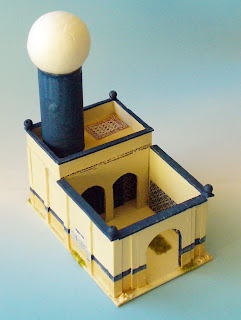 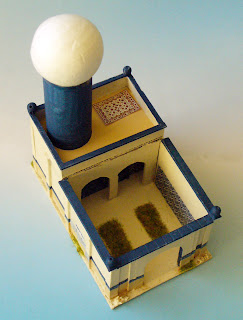 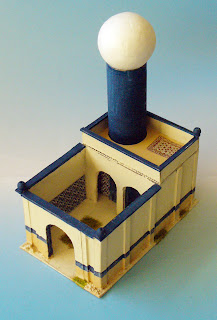 Progress on the small Mosque, which I last posted about in mid-November, painted and with some ground work around the wall. You can also see the ceramic tiles around the inside of the wall (click on the picture for a bigger version) two areas of grass inside the walls forming paths, the tiles are also on the inside of the colonnaded walls section. The small round finials on the corners of the walls are made from small beads. Also added for a bit of interest on the flat roof is a oriental rug.

The next stage will be the complicated bit, building the small balcony and roof around the dome and putting the finishing touches to the dome its self.

Final Damaged Houses and thoughts for 2013 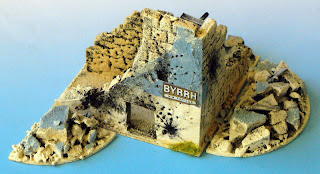 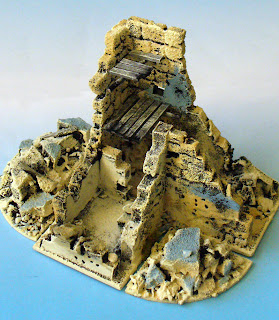 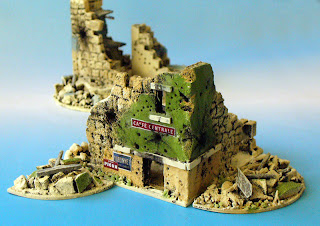 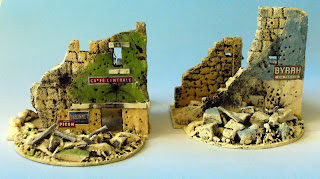 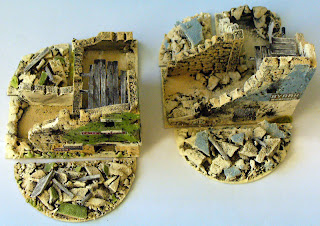 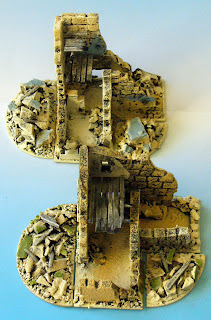 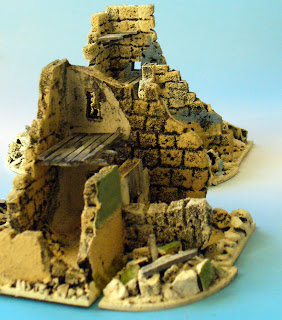 The first post of the new year, is finishing off the damaged houses for down town Asmara, final touches have included adding some signs and posters from the great selection available at the Rapid Fire website page 4 of the site has a good selection. Adding some smoke and blast damage. Also plastering over the joins between the sheets of foam-board which were still visible and re-painting where needed.

So onto the traditional setting of objectives for the year, which will inevitably fall by the way side of real life and the "SQUIRAL" like attention span of yours truly.

1) WW1 early on 1914, 10mm scale Pendraken figures, GHQ card buildings for the terrain, with some scratch building, canal, slag heaps, flooding. This terrain to double up for WW2 blitz period and Sea lion UK also in 10mm scale. (this one has been on the list for at least the last 3 years, with a very small amount of progress)

6) 2mm Battle in a cigar box, with rules based on Bob Cordery's Portable wargames rules

That's all I can think of at the moment, but I'm sure other things will crop up as the year goes on. Hope you all got what you were hoping for at Christmas and that 2013 will bring you and yours health and good fortune. All the best for now.

Airhead
Posted by airhead at 22:21 No comments: