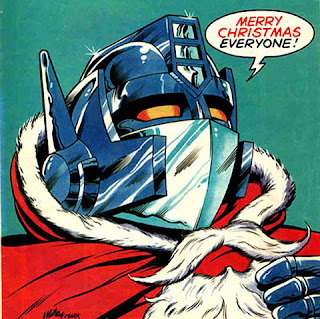 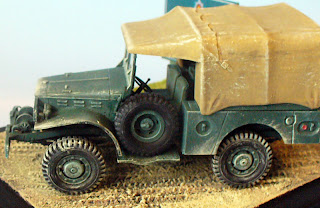 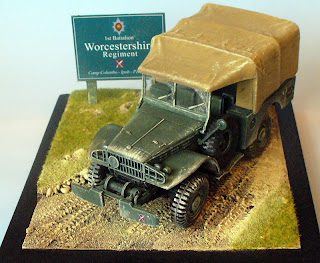 Happy Christmas to all of you out there in Blog land, and all the best for the new year. Not sure what or who the robbo-santa picture is but I thought it was quite cool and seasonal at the same time. The 1/35th scale model of the "BEEP" a heavier version of the Jeep, is a Christmas present for my Dad, who fought in the Malayan emergency in the early 1950's and learnt to drive on a Beep while in Malaya.
Next year my aim is to up my posting rate on this year, and try for at least 3 posts per month. Lots of plans in my head, its just getting the work bench time to actually produce the stuff that is the issue at the moment. Big ideas/plans for next year are based around 10mm WW1 terrain, early on 1914 style, so no sea of mud and endless trench line. Also going into the micro world of 2-3mm stuff and hoping to produce the battle in a box idea.
All the best from me and the Airhead family, have a good Christmas and all the best for 2012.
TTFN
Airhead
Posted by airhead at 17:41 3 comments: 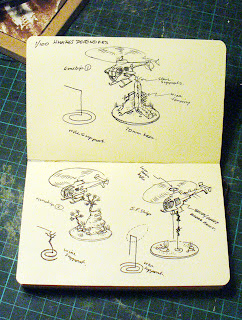 My old glue gun has finally given up the ghost, after over 3 years of dedicated service, during which it contributed to the vast majority of the projects on this Blog. So I'm of to find a new one. Its my number one priority at the moment. If you have never used one, go and get one its my number one terrain making tool.
On other fronts very little progress at the moment, thanks to daughters university application on going /uni visits/Job/life in general. But still planning in the spare moments I get. The above sketches of 15mm scale helicopters were done on a Cross Country Train from Southampton central to Birmingham new street, running 50 minutes late last week (train in front of ours ran into a tree). The sketches show me working out how to mount my Israeli gun ships on wire, which is hidden within the terrain on the base. Click on the pictures for bigger versions
Posted by airhead at 21:31 1 comment: