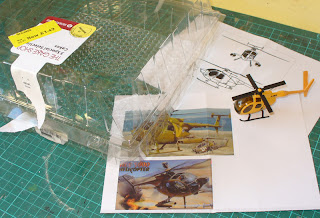 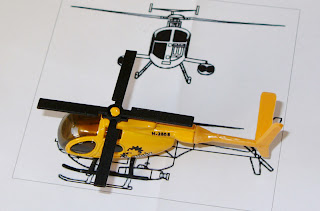 Final getting around to doing something with my 15mm Helicopter mountain, I spent some time looking for reference pictures on the web and found some nice plastic kit box art for inspiration. Also found a great line drawing of the 500MD/TOW Defender version which I intend to make for my Israelis. Looking at the line drawing you can see that the rotter blades that come with the model are hugely under scale, and the tail construction is different.
The next issue was to find some clear plastic to use for the rotter disc's which will replace the blades that come with the model. Cake was the answer, in the shape of a discount box of meringues from Morris's supermarket. The top of the box looked fine, but when cut out I thought it looked to flimsy. But one the discs were cut out. They were fine. I treated them in the same way as the propeller on the Zero project I produced. Using discs of sand paper to scuff the plastic. Next on the list is to make the pods for the TOW missiles and look at creating the new tail structures.
Sorry for the lack of posts around here, but real life is a tad frantic at the moment and hobby time is on the tight side. OMG I bought the Helicopters last December, how time flys.
Posted by airhead at 22:30 No comments: 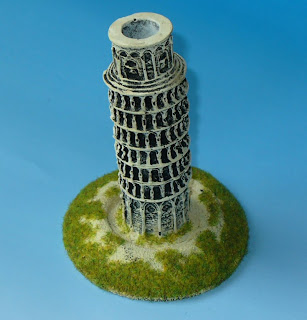 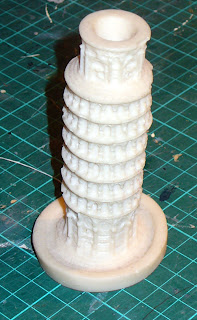 A quick and simple addition to my Roman 10mm selection of terrain items, a roughly 10mm scale model of the leaning tower of pisa. Saved from the rubbish bin as the daughter re-decorated her bedroom. I now the towers construction started in 1170, so its not really Roman by any stretch of the imagination, but hay it works for, it looks Roman to me. So that's fine by me. A quick black undercoat and paint job with a round base built up with filler and then flocked.
Posted by airhead at 22:16 1 comment:

Back from the med 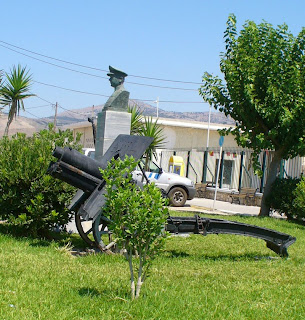 So back from sunny Kefalonia to rainy Shropshire, had a great two weeks staying in the west of the island. very relaxing. The only bits of military history related stuff that I spotted was the above gun and monument out side the cost guard post in Argostoli the capital of the island. Not sure who the chap was or what the gun is. Looks WW1 vintage to me, but thats just a blind guess. Also sore another monument on the way into the town which has two small mountain gun/howitzer type things either side of a white marble statue. No picture of that one I'm afraid.
During my relaxing time by the pool/beach I managed to read 5 paper backs, 1 Simon Scarrow "Eagles prophecy", 2 Voices from the battle of Britain/blitz, 3 "Zero History" William Gibson, 4 Conn Iggulden "Lords of the bow" 5 Christian Cameron "Killer of Men"
1) 8 out of 10 good story with some nice action. Ripping yarn. 4 more to go in the series.
2) 5 out of 10 Nothing new £1.75 from a charity shop so no complaints.
3) 9 out of 10 Been waiting for this one for a long time, well worth the wait. He invented the modern world
4) 8 out of 10 £1 from a charity shop, shows the dangers of buying historical fiction on a whim, I loved it, yes I now its historical accuracy is questionable, but I have always had a soft spot for the mongols. Must get the rest.
5) 8 out of 10 Ancient Greece and the Persians, what's not to love, a very few strange modern terms used. Will get the next one set during the battle of Marathon.
One thing that does bug me with Historical fiction is when the publisher changes the cover design of the books half way through the series, it just spoils the look of the book shelf.
I'm planning to finnish of some outstanding terrain projects before Christmas, will also be making a start on the Great Helicopter building project. TTFN
Posted by airhead at 21:21 No comments: