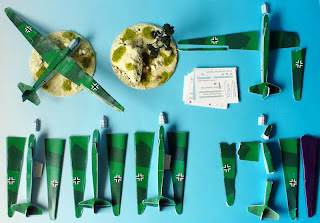 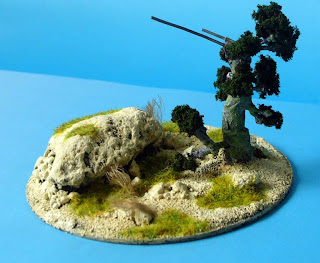 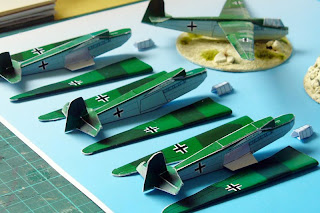 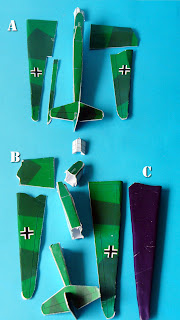 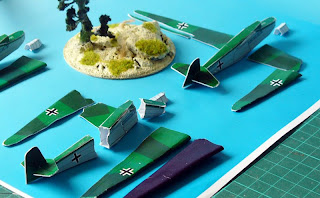 Slow but steady progress on the DFS front. Thought I should post some update pictures from the factory floor, all of the basic construction of the six gliders is nearly complete, just need to finish of the skids, wing struts and the tail skids, then its onto painting them up.
Top picture shows all of the fleet in repose. Bottom left are the three which will be landed/landing. The middle one will be the in flight model. The other two have the doors open, for disembarkation of the fascist horde.
Second picture shows the base finished for the in-flight DFS 230.
Third picture gives a close up view of the open doors of the two landed models, quite easy to do with a sharp scalpel, just need to be careful when sticking them together.
Fourth picture shows the two crashed gliders A and B. C is a wine foil wing to be used as a crumpled wing on one of these models. Not sure yet what will be the final state of these two. One thought involves a shepherds stone hut coming into contact with the front of one of the gliders. When looking at some reference pictures of crashed DFS's, once the structural integrity is gone, they do seam to resemble a pile of sticks and canvas. So will have to see what I can come up with in that line.
The last picture is a three quarter angle shot of the two crashed gliders, the basic thought with these two, is that one will be survivable to crew and occupants on the throw of a dice and the other not. Well onwards and upwards as they say.
Posted by airhead at 08:47