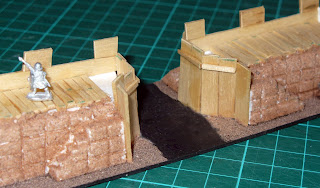 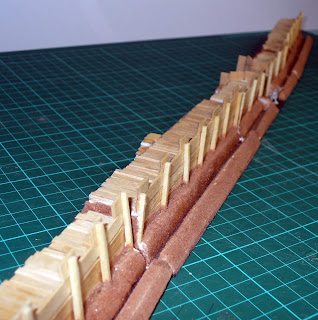 The Antonine wall stretches for 39 miles from the firth of Clyde to the firth of forth in Scotland, 100 miles further north than Hadrian's wall. The idea for doing this project came from a family holiday in the west of Scotland in 2006. We stayed just outside Oban. While there I bought a great book by Gordon Maxwell called a Gathering of Eagles (ISBN 1841583847), about the Roman invasion of Scotland. Lots of superb Illustrations of Roman forts, watch towers and the Antonine wall. In style very similar to an Osprey book, soft cover, same size but only £6.99p.
The idea was to build 5 sections of wall, each 6 inches long, the fifth section being a destroyed section for the caledonians to storm through. And one of the other 3 section with a gate built in. After starting to build the wall, it struck me that with some small modifications and additional sections I could also use the wall sections to make a Roman fort. So by cutting the wall bases at 45 degree angle on the back edges and creating 4 corner towers, I had a Roman Fort and a Wall. The next stage of this madness was thinking well you have a fort, what about some buildings to go inside the fort.
The wall was based on my usual art board, the bulk of the wall was made from polystyrene packaging with the turf blocks cut in with a scalpel. The wooden palisades and walk ways were made from coffee sticks. Then PVA glue with sand.
More pictures to follow in the next post.
Posted by airhead at 09:41