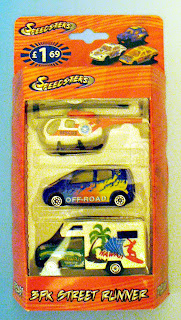 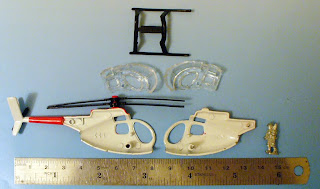 Spending some time in my local B&M bargains store on the look out for targets of wargaming interest and came across this pack of 3 vehicles for the princely sum of £1.69p, and there it was, a Loach OH-6. To good to miss. When I got the pack back home the 2 vehicles went strait in the bin, a note of warning here, I later fished out the camper van from the bin, after the thought that the body work on the back could make a useful pre-fabricated building for my yet to be built fire base.
On closer inspection of the OH-6 the skids had been put on backwards, but I was able to pries apart the 2 half's of the body by putting a small screw driver up the engine jet pipe. This has opened up the option of not only painting the inside of the cockpit but also perhaps using the Peter Pig Hue crew, and put some additional detail in the cockpit.
In the bottom picture I've put a steel ruler in the shot for people who are interested in the exact scale of the model. For people like myself who have a more relaxed attitude to the exact scale of things I've put a Peter Pig 15mm scale 8th army figure in the picture. Looks to me just slightly over scale, but not by much. Next mission is to go and find some more, 2 should do it.
Posted by airhead at 09:00

Great find! I hope it comes to the states.