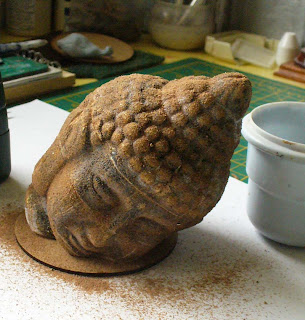 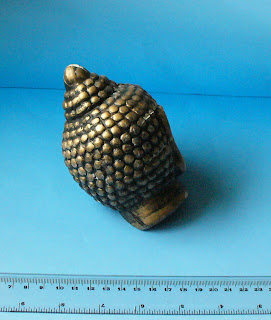 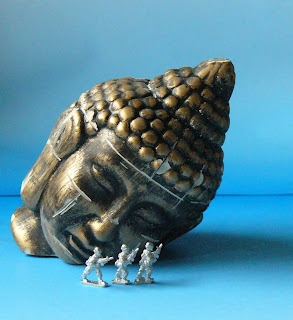 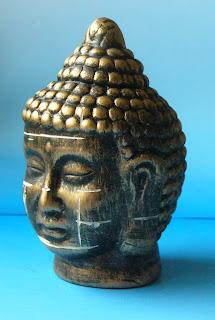 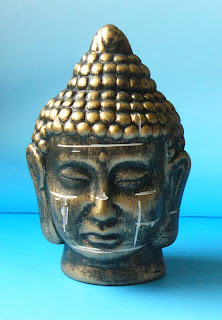 Another trip to the high end of the retail delights of Birmingham (99p shop in the arcade above New street station) and I found this Buddha for the princely sum of 99p. Its intended as a garden decoration. At this price it was to good to miss, and as I have my 15mm scale special forces camp for Vietnam on the to do list for this year. I thought it would make a great centre piece for the camp. As for the rest of the camp I've not really thought that much about it yet.

Once I got it home and examined it closer it was apparent it was cast from plaster. My idea was that the statue would be at an angle after subsidence had undermined it. I cut some lines into the figure with a hacksaw blade to represent the blocks of stone which make up the figure. The middle picture above shows the figure after the lower right section was cut away, with 3 Peter Pig US Vietnam infantry passing in front to give an idea of its size.

The first picture above shows the figure after its  been covered in PVA glue and sand and stuck to a small circular MDF base from War bases.

So next I better start to think about the layout of the SF camp, nothing to big, about 12" across at the most. On other fronts more progress on the 10mm card buildings and also a bit of a change of course from my usual areas of interests, but this project will remain under wraps till later in the year.

That looks really effective....and at a perfect price as well (You can't argue with 99p!!).

Crazy idea here, but the hair on that Buddha makes me think of a giant drill bit. Maybe it is a tunneling machine for a devout Buddhist rebel force?

Thanks for the comments chaps.

Not sure about buddhist rebel forces, brings to my mind Thunderbirds (UK 1960's) kids SF program, one of the rocket ships had a tunneling machine.