Battle in a box 2mm scale 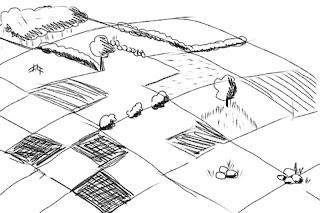 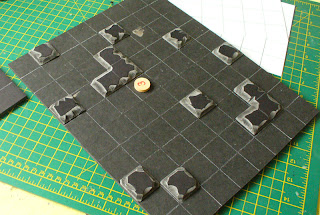 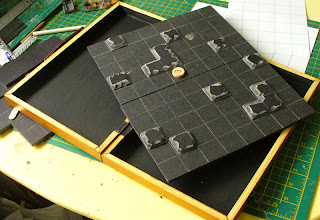 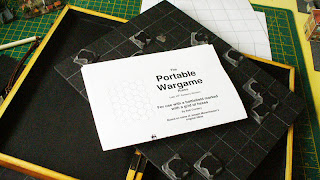 I have finally made some progress on my battle in a box project, first mentioned as an objective for this year in my Christmas post from last year. At that time I was looking a using a cigar box to hold the terrain and units in. This idea didn't work out, but as Lady Mary went off to university last September, she had a big clear out, and one of the items she disposed of  was a cheep art box with a selection of paints, pens and other bits. The type of thing you can pick up from The Works for about £5.

I removed the plastic trays from the inside of the box, and then painted the inside matt black. The Battle boards are made from 5mm thick foam core, divided into 30mm squares, 8 by 10 in total. The bottom three pictures above show the basic boards resting on the box, with a copy of Bob Cordery's Portable Wargame rules They are second from bottom on the linked page. I have always admired Bobs elegantly simple rules. The only issue that I have with them is an aesthetic one, the use of gridded terrain has always struck me as being to close to a board game from a visual perspective.

My aim with this project is to see if I can create a portable gridded wargame which doesn't look like it is one, if you get what I mean. The top picture is a sketch I made on my iphone, it gives a very rough idea  of how I hope the terrain boards will look.

Elegsnt, simple and practical. Looks very interesting. Can't wait to see how this turns out!

like the idea, I may have missed it in a earlier post but what are you using figure wise?
Peace James

Very intersting concept. Look forward to seeing how it progresses.

Thanks for the comments chaps, hope it works out OK. To answer your question James, I'm going to use the Irregular miniatures 2mm Horse and musket range.