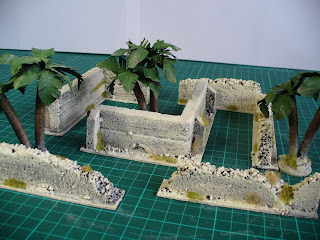 The walls and fencing in the above pictures were produced for use with my 28mm middle east / southern Mediterranean village which is used for skirmish gaming in a wide rang of periods. The more cover to hide behind the better. The fencing was produced using lollipop sticks split into rough lengths then hot glued onto an art board base with the ground work built up with filler then PVA, sand and small stones from the garden.
The adobe type walls were polystyrene packing which a clip frame came in. The more tumbled down sections were broken of along the top edge and had PVA and old fish tank gravel (nice rounded weather worn looking stuff) glued along the top edge to give the rough effect. Over all I think it gives a nice effect and when seen in combination with the buildings works well.
Posted by airhead at 07:26