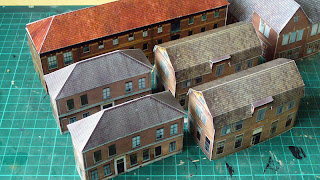 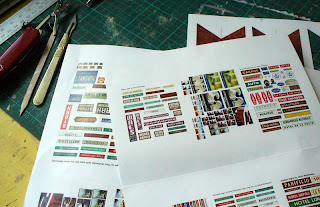 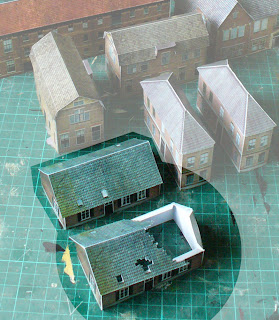 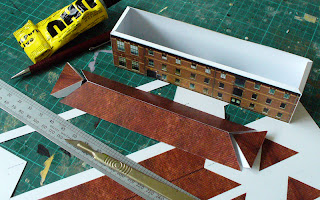 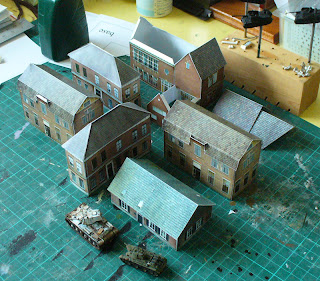 I went over to the GHQ models web site recently to have a nose around in their free stuff  section, I have blogged about this in the past, in August 2010 in fact. I down loaded quite a few of the pdf's then , and over the past 2 years GHQ have uploaded lots of new buildings as 1/300 scale pdf's. So of I went and down loaded and printed out lots of new buildings and scaled them to fit with my 10mm scale areas of interest. WW1 and Franco Prussian war.

The top picture shows a selection of the new buildings that I have constructed, second one down shows a selection of posters and sign that I have down loaded from the Rapid Fire site, and the printed out at a size to fit with 10mm scale buildings. Next picture shows one of the smaller building with a damaged version of its self in front showing the roof blown of with tiles missing.

Next is a picture of one of the big new building, a warehouse from Nijmegan. Last of all to give you a feeling for the size of the buildings a picture with 2 of my Russian 10mm scale tanks, a KV2 and a BT7. My idea is to construct some multi building bases with some of the terraced houses with added out buildings and gardens/yards and then individual buildings, with destroyed or badly damaged versions of some of them.

All of the above picture show the buildings in the early stages of construction, so no extra detailing or painting has been do yet, thats to come next. TTFN.